Linda Riseley photography and digital art work is frequently on display both domestically and internationally, including the Louvre 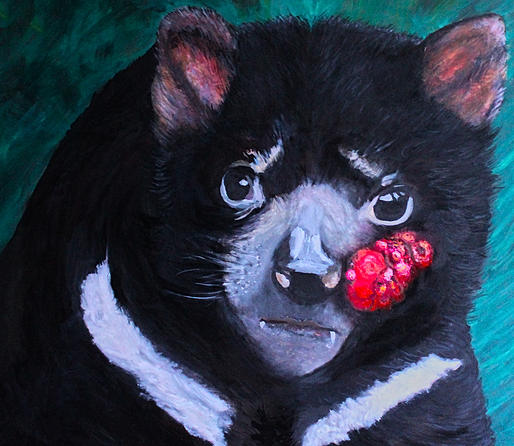 In particular, Riseley’s “Eyes” collection saw extensive viewing at the Louvre as well as the piece “SOS” which can be seen on the right.

There is much conjecture as to how and why the deadly facial tumour disease took hold in the uniquely Tasmanian (Australian) creature called the Tasmanian Devil.  I chose to paint it in oil because photographs are too graphic I hoped that by painting you can sense the helplessness and virtue in the animal’s eyes pleading for action to take place.

Tasmanian devils represent the world’s innocence being wiped out, voraciously swallowed by greed. While stocks grow, nature is depleted. These creatures of my home are dying painfully yet the government continues to encourage logging in old growth forests and mining exploration in world heritage areas such as the Tarkine.  With global warming and drastic climactic changes our governments much like those of many countries continue to dangle false hope of jobs and economic growth over what is the right thing to do: Save our Souls and those of the Tasmanian Devils. Stop destroying old growth forests around the world.  Use green energy and invest in smarter cleaner alternatives.  Listen to the people of the world save our planet before we go the way of the Tasmanian Devils.

← Back to Artist Profile